About Patchwork and Quilting

We thought it might be useful to explain a few basics about patchwork and quilting, (as used in our products).

The term “Patchwork”, sometimes known as “pieced work”, is typically a form of needlework. The origins for patchwork lie in the need to use every piece of valuable fabric – which was an an expensive commodity. However there is no doubt that this functionality was overtaken by the decorative properties afforded by the technique. There are many fascinating stories of English and Dutch settlers in America forced to make patchwork quilts out of seed bags and using all manner of fillings, even chopped straw, to create bed coverings to keep them warm in the harsh American winters. Eventually the making of quilts became an art form and a method of demonstrating sewing skills. Designs became ever more intricate, and quilts were often mentioned in wills and handed down through generations as valued heirlooms.

The method of creating patchwork involves sewing together pieces or scraps of fabric into a larger design, to form a functional piece. The overall design possibilities are infinite and that’s one of the things we love most about it. Some designs are based on repeat block patterns, some with different designs in each block (known as a sampler made to show off the needleworkers skills), some create intricate patterns while others are completely random. The beauty of patchwork lies in the way in which different colours, shapes and patterns are intricately sewn together. Patchwork is used to create a myriad of different functional items, from handbags to bedcovers.

Appliqué is a sewing technique. It involves stitching a small piece or pieces of fabric onto a larger one to make a pattern or design. In some instances the shapes are created by covering a paper former and turning back the raw edges of the fabric then basting or tacking it before then stitching neatly onto the background fabric. In other cases the edges of the shape are left ‘raw’, and either covered with an open or close zig-zag stitch (like in a button-hole), or blanket stitch. In some cases the natural fraying of the fabric a little forms part of the natural beauty of the piece.

Quilting is the technique used in sewing that involves taking two layers of fabric, then sewing them together with a layer of padding, batting or wadding in between. The primary function of the stitching is to hold the layers firmly together, but in so doing it can also be highly decorative. The stitching may be simple straight lines or very elaborate, depending on the design of the piece. It was traditionally done by hand, but in more recent times cab be done on either a sewing machine or a larger frame known as a longarm quilting machine.
This layered effect has conventionally been used in clothing and bedding because of the warmth created when the layers of fabric and wadding trap air and hold in body warmth.

Patchwork, appliqué and quilting are often associated with each other, and all three can be used together to create beautiful needlework.

What is a quilt?

A quilt is a form of layered blanket. The top layer may be one piece of fabric (often referred to as a whole cloth), or in the case of a patchwork quilt may be formed from many pieces of fabric sewn together in a decorative fashion. The bottom layer is usually made of one piece of fabric, but can also be pieced.

These two layers are then sewn together with a padding between (as described in ‘What is Quilting?’above) to create a warm bed covering that has not only useful properties but has a very decorative function. The stitching on the quilt plays a very important function in preventing the padding layer from separating and moving around (especially when washed). Depending on the construction and nature of the padded layer, the stitching is either close together or can be as much as 4-5 inches apart, or even more. Elaborate stitching patterns have developed over time and are used to create a relief pattern on the quilt. Originally this stitching was all done by hand, and would be many months in the making. Remember that in times before electricity this would have to be done in daylight hours or by candlelight – which can be very challenging! With the invention of the sewing machine much patchwork and quilting began to be done by machine.  However some needleworkers still prefer to quilt their covers by hand.

The wadding or batting these days can be made from many different materials; cotton,silk, bamboo, wool, polyester or even mixes of these.

About Patchwork and Quilting traditions.

Reference to `quilt’ or quilting appears to have first been used in England as early as the 13th century, and is thought to connect with the Latin word ‘cucita’ meaning a bolster or cushion. Because of the very labour intensive nature of quilts, particularly patchwork quilts,  and the sheer beauty of the end results, many quilts were mentioned in household inventories and became treasured heirlooms.
When the British and other European settlers, (notably the Dutch), went to America they took with them a tradition of making quilts. Indeed the scarcity of fabrics and the need for thrift spawned a very strong tradition there. In fact creating quilts developed significantly into an art form across many continents, and today many antique quilts fetch high prices in antique shops and auctions.

While central heating and a trend towards sleeping under european-style duvets in the UK have become popular in recent times, there is no doubt that the sheer beauty of a traditional quilt (patchwork or just quilted) cannot be denied. The existence of so many antique quilts demonstrates just how treasured they have become.

To view our current range of crib and cot quilts click here.

To view our current range of patchwork blankets click here. 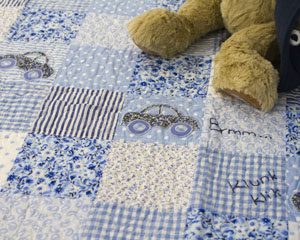 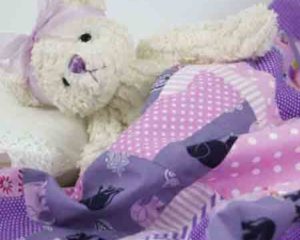